The way your smile just beams. About KS The Man Who Smiled Too Much.

KS THE MAN WHO SMILED TOO MUCH is an art history concert-lecture which is inspired by the fascination exerted by the smiling face of Kurt Schwitters, as the artist appears in the famous photograph taken by Genia Jonas in 1926. The photographer, at that time very popular and widely appreciated for the psychological sharpness of her pictures, took an image of her friend characterized by a vivid, pacific and optimistic expression of joviality, which is as distant from the tormented existentialism of the Expressionists as from the furious approaches of the Dadaists, that the artist only partially supported, and with the benefit of a tiny interpretation marked by the convergence and metamorphosis of many practiced languages.

Indeed, Kurt Schwitters’ smile represents a sort of heresy compared to the exalted intellectuality of the Avant-garde which, if on the one hand destroyed the classical rhetoric, on the other it established an aesthetic ideal likewise dogmatically sculpted and often not free from moralistic implications. On the contrary, Schwitters provides us with a model of subjectivity based on the openness towards the unexpected, that is a willingness to deviate from established routes, and trust in a possible re-composition of banality and daily disasters (as well as historical), as a function of the poetic action, aimed both at turning materiality into forms of expression, and at making reality a place of rhythmic and widespread coming and going between meaning and no-meaning.

Such programmatic submission to the promises of life and language, which will never fail even during those years of poverty and instability of his exile, can only sound like an exquisite lesson of ethics, bearing in mind that this lesson was handed down by a man who died in poverty, having suffered the destruction of his artwork and the expropriation of language. Schwitters, who in 1944, in London, was reading the Ursonate, in some photos taken on that occasion by his son Ernst, showed the same irresistibly happy face: happy for his meaningless poem, modernly and humanly Dionysian.

Finally, in those pictures taken by Genja Jonas in 1926, there emerges a human side which does not exclude an explicit attractive strength, capable of a sensual light-heartedness, on which KS THE MAN WHO SMILED TOO MUCH intends to focus.

The starting point offered by Schwitters’s smile is therefore an occasion to reflect both on the extraordinary influence that his example had and still has on art, and on the affective contents which animate more generally the artistic experience and form the aesthetic judgement.

In this regard, the role of pianist Steve Natterstad in the concert-lecture is fundamental, performing a programme of standards from Broadway, like The Man I Love, Stairway to Paradise, Send in the Clowns, among others, in which a sentimental fiction is dramatically orchestrated. In KS THE MAN WHO SMILED TOO MUCH, in fact, the German artist is meant as a phantasmatic figure at the centre of the conceptual narrative process, which overlaps forms of a fictional fable over the artistic events of the past century, in which reasons are affirmed that are not so much linked to documentary evidence of historical facts, but rather to the subjectivity of those who, by narrating, model the object of desire.

Arianna Desideri and Enrico Colantoni carried out a precious contribution in organizing the meetings, in preparing the materials and finally staging the results. A careful report of what happened during the workshop and the development of the dramaturgical construction work was written by Arianna Desideri, included here in the ks2 section.

Each session, in fact, examined and discussed different kinds of documents, not just relating to Schwitters, but always following a mimetic reconstruction of his artistic personality, and outlining a kind of relationship with the work of art which is extremely conditioned by sentimental fantasies and rituals.

WORKSHOP 1 was mainly based on the writings concerning Schwitters and the construction of a litany centered on his name as a ready-made. WORKSHOP 2 dealt with the theme of art history as a sentimental and fetishistic relationship with artists and artworks. In WORKSHOP 3 this relationship takes on the melancholy forms of an impossible copulation and, finally, in WORKSHOP 4 the promise of a linguistic regeneration is entrusted to the meaninglessness of the materials of daily life as of history. Same theme returns in the video Pencils consumed by writing Poetry.

The meetings denominated CONVERSATION I and II were an opportunity to present, in front of an audience, the progressive results of the workshop both through the installation inside the museum, as well as through two performances: the Rosary-Schwitters and Love letters for any occasion (slightly modified).

The imitation of Schwitters as a loved and desired object with which to get in touch and be transformed into linguistic and symbolic material, is expressed above all in the video The Immaterial Figure , where the figurative presence of the artist is approached, and at the same time dematerialized, by a dreamlike curtain of voice and light. On the other hand, in Notes to Do, Do, Do, the same attempt to merge concerns in particular the work of art. The introduction to this symbolic body / material body scheme, as well as to the sentimental temptation of the ghosts of art history, consists of a short essay entitled: Reading Boris Groys (1) : with Patti Smith and Arthur Rimbaud, contained here in section ks11.

The workshop and the resulting concert-lecture took place at the Macro Museum in Rome in May 2019 and on June 2nd.

The dramaturgy of the final performance Ks The Man Who Smiled Too Much is structured around 7 Broadway standards performed on the piano by Steve Natterstad, with whom there has been a constant dialogue concerning the harmonization between the starting theme of the project and the musical choice. Tianyi Xu’s presence was fundamental in giving rise to a sculpture of movements and actions on the scene. A choir interacted with the narrative, formed by Luigi Battisti, Simone Compagno, Claudia Melica and Jacopo Natoli. For the occasion, a booklet was published with an introduction by Francesca Gallo, which follows below.

TOWARDS A CONCERT. PROGRESSIVE MATERIALS FOR KS DRAMATURGY.

analysis of a selection of texts on Schwitters, aimed at identifying all the artist’s occurrences as syntactic subject; reduction in simple sentences and creation of a mantra/rosary; courtship and signification of the thing/ghost; Stairway To Paradise.

Schwitters’s face in relation to the pictures of his contemporaries; the catalogue of types; Schwitter’s anti-intellectualism; inebriation; the spread of life; NON-noli me tangere; pictures of the artist as lover, partner, thief and player; The Man I Love.

to merz art history that is to take the poison out from the work of art; feel as deeply as possible; making love to the work of art; euphoria; fainting spell; I’ve Got A Crush On You (and other aesthetic theories).

UR-language; the promise of a sense-without-meaning as a love-without-ending token; undoing language is undoing death; Over The Rainbow.

KS THE MAN WHO SMILED TOO MUCH

A concert-LECTURE especially about Kurt Schwitters

conceived and produced by

thanks to the precious contribution of

KS, The Man who smiled too much (June 2nd 2019, Macro Asilo, Rome) is the lesson-concert in which Pasquale Polidori presents visual and narrative materials by and about Kurt Schwitters, while Steve Natterstad plays on the piano standards from Broadway (with stage action by Tianji Xu).

Polidori’s work was developed in the previous weeks during the workshop Verso un concerto. Materiali per la drammaturgia di KS, The Man who smiled too much, held by the artist from May 1-31 2019 at Macro. The work is focused on Kurt Schwitters (1887-1948), starting from photographic portraits, correspondence and the artist’s writings, mixed with other collected texts, according to a method already experimented by Polidori.

As a protagonist of the historical Avant-Garde of the beginning of the twentieth century, Schwitters not only livened up German Dada but was also a tireless weaver of contacts and exchanges with some Neoplasticist and Constructivist artists: journeys, letters, editorial and exhibition projects, mark a biography characterized by collaborations even between pieces of research which are formally very distant [1]. An important fact, then, to understand the fascination that Schwitters exerts on Polidori, who – after the poets to which he dedicated the series Forma manifesta (2012-2016) – created similar homages to Marcel Duchamp (2015) and to Joseph Beuys (2019). Neither painters nor sculptors, but rather artists united by a line of research in which the increasing processing and performative attitude, and, not by chance, the hegemonic conceptual and verbal dimension, have substantially and variably eroded the objectual work of art.

Nevertheless, Schwitters is especially known for his variation of collage with found materials – around the syntagma merz – which reaches environmental dimensions in the Merbau; legendary domestic space, on whose surfaces concretions grow, as in a karst cave. In the same way Polidori’s germinative and polymorphous work revolves around a certain subject, in order to crystallize into video, texts and perfomance. The Merzbau – repeatedly destroyed by the randomness of life and by the waves of history – is stubbornly re-proposed by Schwitters in the various cities to which he moved, up to its “reconstruction” (1981-83) at the Sprengel Museum in Hannover as an act of museal and historiographical consecration [2]. In the wake of such fruitful, yet controversial, sacralisation of some charismatic figures belonging to the history of art, Polidori has also been moving for some time and with his own predilections, in search of genealogies for his own artistic path, in which the linguistic, conceptual and performative dimensions overlap and interact with each other.

In KS, The Man who smiled too much, in fact, Polidori leads an ideal conversation with Schwitters, on the basis of the texts, works of art and documents belonging to the German artist, who has become an object of filial admiration, as the student does for his teacher: the biographical data, news and the phantasmal drive are interwoven together by Polidori in symbolic narrations and, as usual, such activity is open to the contribution of other subjectivities, invited to confront with the methods and forms of an originally creative, analytical and deconstructive path. 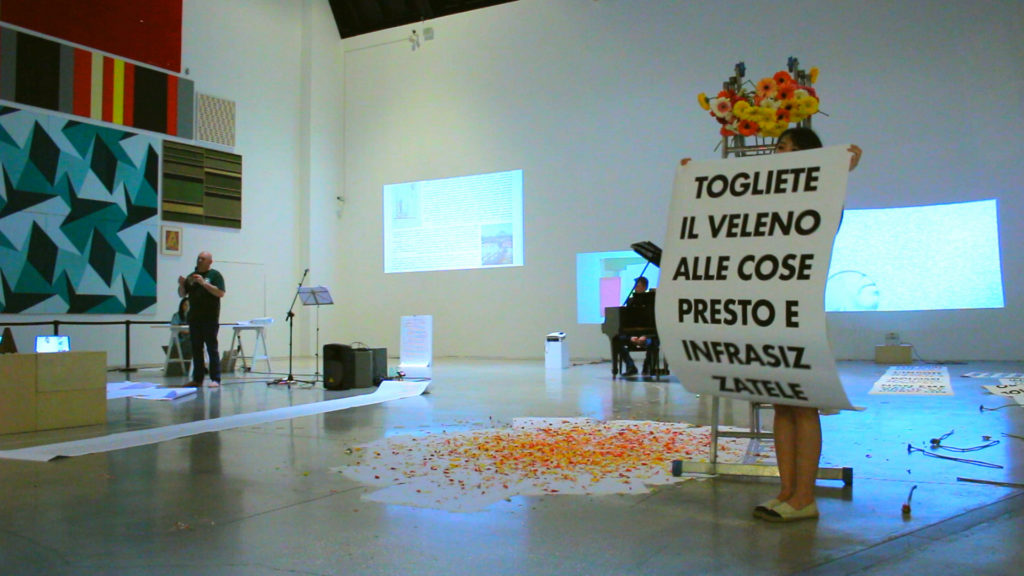